At Deep Learning Summit 2017 in San Francisco on this January, PFN announced advancements on distributed deep learning using Chainer in multi-node environment. In this post, I would like to explain the detail of the announcement.

Despite the performance of GPU continuously improves, the number of parameters in neural network models and the computational cost for training them are also increasing to realize higher accuracy using larger training dataset. Some use-cases can take more than one week to train on a single GPU using frameworks including Chainer. In order to handle larger size of training dataset and to make iterative trial-and-error more efficient, it is paramount to accelerate the training process by coordinating multiple GPUs. Therefore, PFN developed a package named ChainerMN (Chainer Multi-Node), to add a distributed training functionality to Chainer.

The current implementation employs data-parallel computation for distributed training, especially with synchronous model update. In this approach, each worker owns a copy of the current model, and all workers calculate gradients together on a minibatch in each iteration by dividing the minibatch into subsets.

ChainerMN depends on MPI for inter-node communication, so that it can enjoy the benefit from faster network infrastructure such as InfiniBand. NVIDIA’s NCCL is then used for intra-node communication between GPUs.

We evaluated the performance of ChainerMN on the ImageNet classification dataset using a CNN model (ResNet-50). All of the experiments ran on a computing environment provided by Sakura Internet. Please refer to the Appendix on the bottom for more details of experimental settings.

Note that the following performance results might not be completely fair, even we intended to perform as fair comparison as possible. First, the implementation of ChainerMN has been highly optimized to the experimental environment, since ChainerMN was developed on it. Second, tuning for other frameworks in the later comparison might not be sufficient, though we tried to do our best by carefully reading the official documents, tutorials, and even existing issues on Github. To encourage reproductions by third parties, we are planning to publish the experiment code also for other frameworks.

The following figure shows how much the training time is reduced when increasing the number of GPUs. Each training process ends when it reaches the same number of epochs. Up to 4 GPUs, only one node is used, but multiple nodes are needed for 8 or more GPUs. The result is fairly close to the ideal speed-ups, as the training process is accelerated for 100 times using 128 GPUs in this setting. 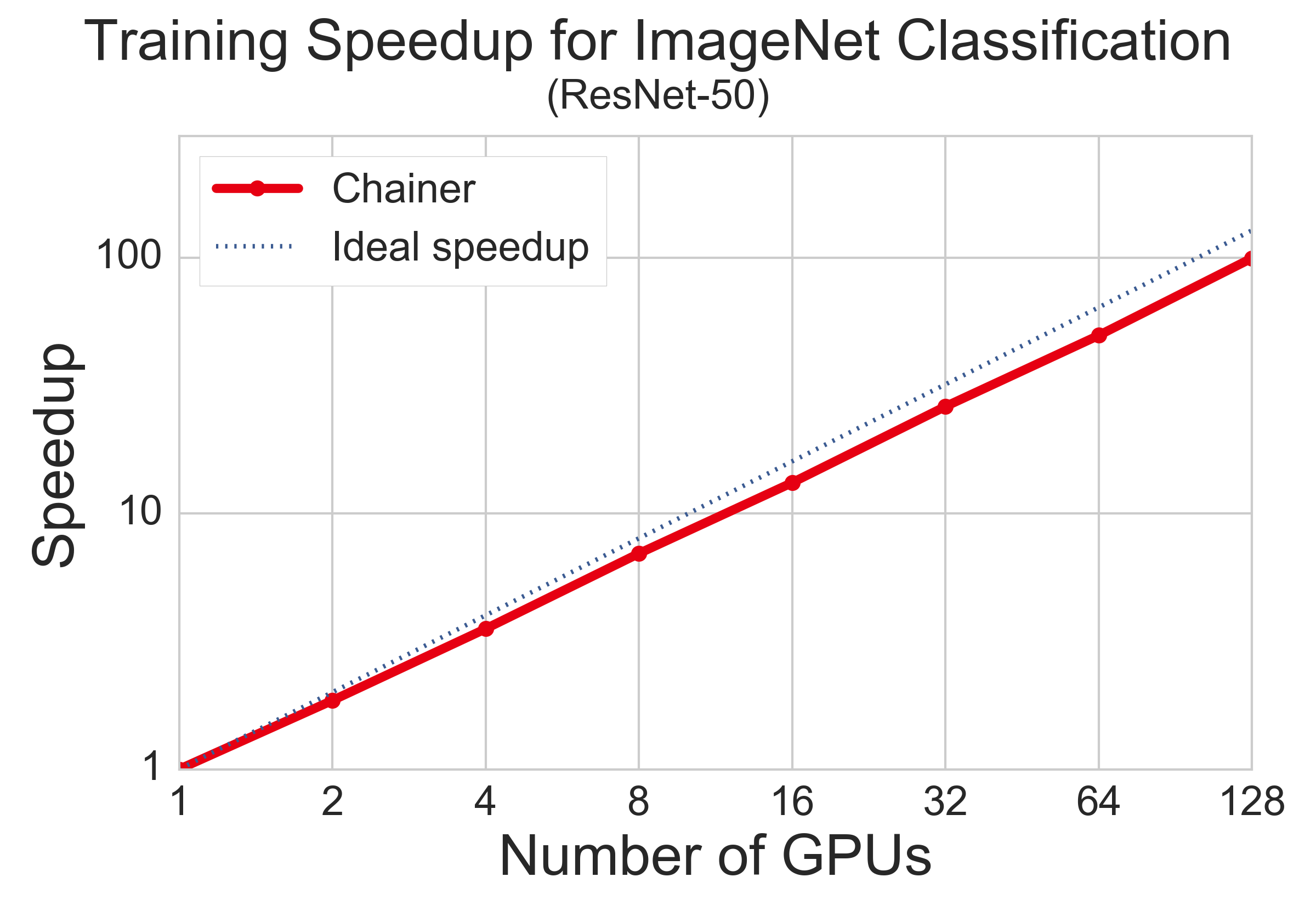 The next plot represents learning curves, as the horizontal and vertical axes represent computational time and validation accuracy, respectively. Two large bumps in the curves are caused by multiplying 0.1 to the learning rate (after each 30 epochs), which is a common heuristic in this ImageNet task. 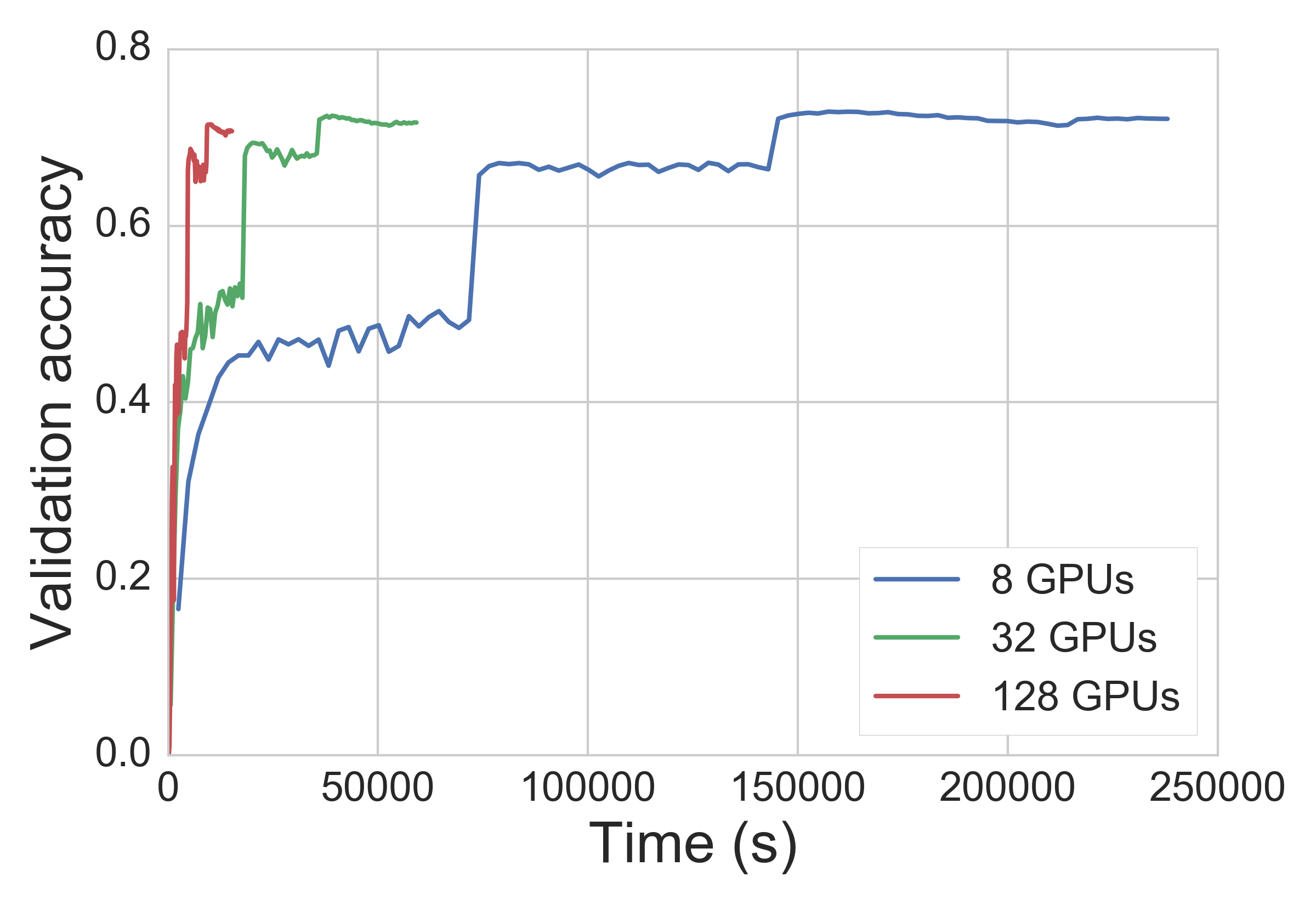 Comparison with other frameworks

The next figure summarizes the computation time of each framework when using 128 GPUs. Surprisingly (also for PFN development team), ChainerMN is the fastest among them. We will discuss the reason of this result through other experiments in the following. 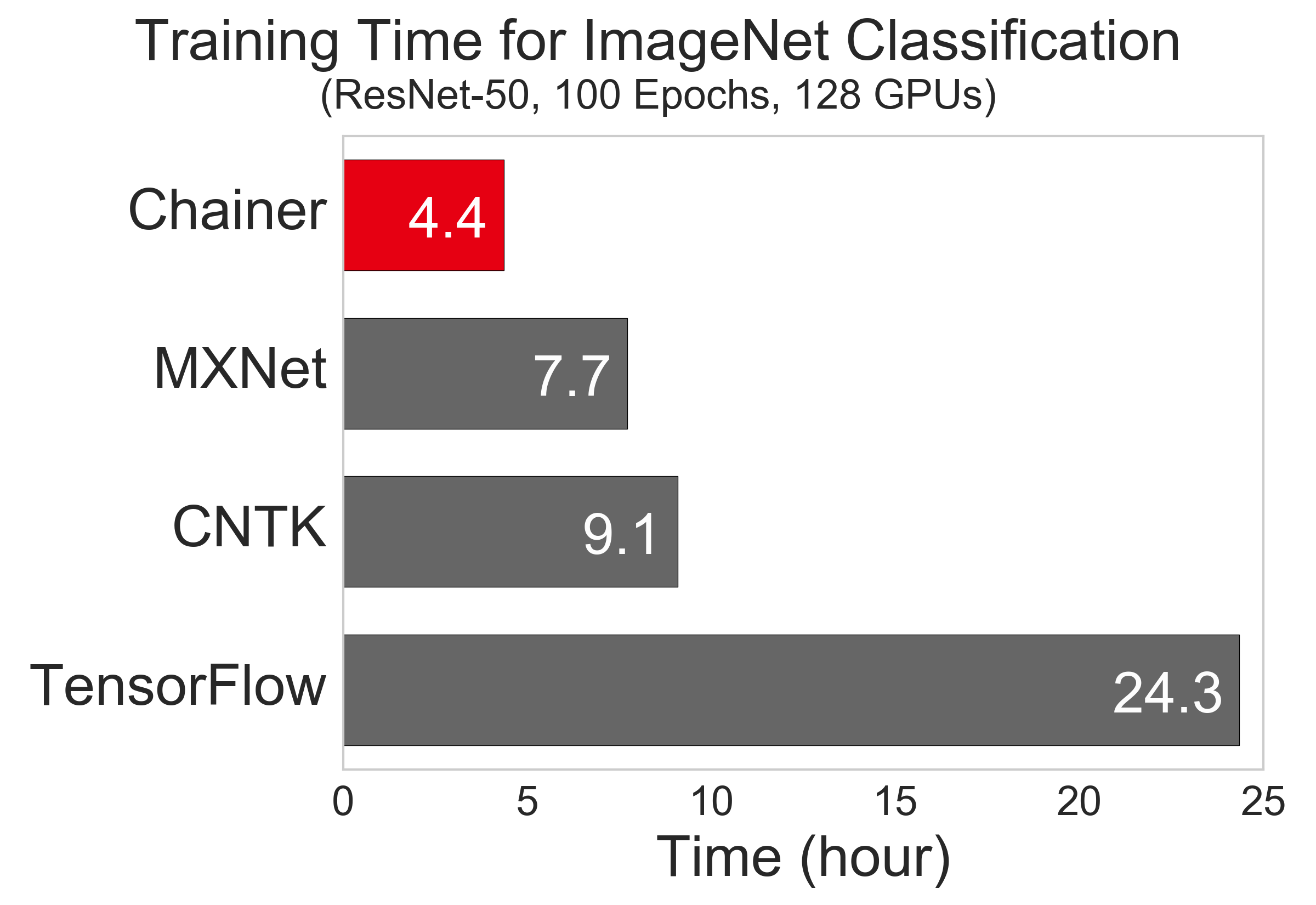 The following figure depicts throughputs of the frameworks when changing the number of GPUs. Though the measured throughputs seem a bit unstable due to small number of iterations, you can still see a trend among them. When using only 1 GPU, MXNet and CNTK are faster than ChainerMN, mainly because both frameworks are implemented in C++ unlike Chainer (Python-based). With 4 GPUs, only MXNet becomes a bit slower. This can be because CNTK and ChainerMN uses NVIDIA’s NCCL for collective communication between GPUs in each node. On the other hand, in the multiple node setting, MXNet and ChainerMN show better scalability than CNTK. As a result of faster performance in both inter/intra node communications, ChainerMN achieved the best throughput with 128 GPUs.

Note that we have to be careful when analyzing the results of TensorFlow, because it is a fast enough framework in standalone mode. The reason why it performed poorly even with 1 GPU is that it also runs in distributed mode as well as the other frameworks. Since there seems to exist a substantial overhead in gRPC communication between worker processes and independent parameter server, the performance of distributed TensorFlow is different from that in the standalone mode even with 1 GPU. This result also agrees with some earlier evaluations on the performance of distributed and multi-GPU TensorFlow reported by third parties, such as [1, 2].

One of the major difficulties in distributed deep learning is that higher throughput does not always mean better training efficiency. For example, in data-parallel approach, the size of minibatch increases by adding more GPUs. However, when the minibatch size exceeds a certain threshold, larger batch size severely affects the model update and leads to lower validation accuracy. This is because, when training under the same number of epochs, the iteration number decreases in turn, so that the model cannot get matured enough. In addition, as the deviation in gradients gets smaller, it is well known that the model can easily fall into bad local minima (called sharp minima) so that the final model can have only poor generalization ability.

Without taking into account these circumstances, any benchmarking result only reporting good throughput performance makes no sense. No useful model can be trained just by pretending higher throughput due to too large batch size and/or reduced frequency of model synchronization. Therefore, though GPUs have sufficient memory capacity, we selected a relatively small batch size to achieve reasonable accuracy.

After refinement based on feedback through internal trial in Preferred Networks starting February, we are going to publish ChainerMN as an open source software within a few months.

Notes: these settings follow those of the original ResNet paper [3]. However, we did NOT use color nor scale augmentation in training, and 10-crop prediction nor fully-convolutional prediction in validation. Even under these conditions, ChainerMN achieved 71-72% in top-1 accuracy, which seem to be reasonable accuracy results, to the best of our knowledge.

We tried dist_device_sync mode instead of dist_sync, but the result was not better. Therefore, we decided to use dist_sync as with the official example.

CNTK prefers OpenMPI as stated here, so we used OpenMPI for CNTK.