ChainerMN is a package that adds multi-node distributed learning functionality to Chainer. We have added the following two new functions to v1.2.0 and v1.3.0 of ChainerMN, which are intended to improve the performance on systems whose inter-node communication bandwidth is low.

It had previously been difficult to achieve high parallel performance in a system environment without a high-speed network because ChainerMN was developed assuming a supercomputer-like system with a high-speed network. With these newly-added functions, ChainerMN will be able to achieve high parallel performance even in the cloud and other common systems such as Amazon Web Services (AWS) as we presented at GTC2018.

In data parallel distributed deep learning, the training time is typically dominated by the All-Reduce operation to calculate the sum gradients computed per node. We solved this issue on PFN’s 1,024 GPU supercomputer by utilizing high-speed InfiniBand interconnect, which is also used in supercomputers and Microsoft Azure, and also using the NVIDIA Collective Communications Library (NCCL) that enables fast execution of All-Reduce functions [1]. However, AWS and other commonly used systems have larger communication overhead because they do not have such a high-speed interconnect as InfiniBand. As a result of this, we could not make training faster simply by increasing the number of nodes in some cases. To solve these issues, we have added two function to ChainerMN v1.2.0 and v1.3.0: a double buffering function to conceal communication time and an All-Reduce function in FP16.

Using double buffering to conceal the communication time, the calculation and communication processes can overlap as in the below diagram.

In this case, the optimization process is performed using gradients in the previous iteration. This means it uses old gradients to optimize the model, possibly affecting accuracy. We have learned, however, that almost the same level of accuracy can be maintained when training on ImageNet as demonstrated in the experiment described later in this article.

You can use this function just by making double_buffering=True when creating a multi-node optimizer as shown below.

Currently, this function only supports the pure_nccl communicator.

ChainerMN v1.2.0 only supported All-Reduce in FP32 but v1.3.0 supports FP16 as well. This allows you to perform distributed training even for FP16 models using ChainerMN.  We can expect a significant reduction in All-Reduce time by using FP16 because the communication volume is halved in comparison with using FP32. In addition, now you can use FP16 for only All-Reduce and reduce the All-Reduce time, even if you used FP32 in computation. This is the technique we employed for training on ImageNet using 1,024 GPUs [1].

For FP16 models, All-Reduce is carried out in FP16 without making any change. You can use different data types for computation and All-Reduce by putting allreduce_grad_dtype='float16' when creating a communicator as shown below.

This function only supports the pure_nccl communicator as of today, as double buffering does likewise.

To demonstrate high parallel performance using the two new functions, we measured performance using image classification datasets on ImageNet. We used ResNet-50 as the CNN model. In this experiment, we used 10Gb Ethernet of PFN’s supercomputer MN-1 and AWS as low-speed networks. For more details on the experiment setting, please refer to the appendix at the end of this article.

The following graphs show changes in the throughput as the number of GPUs is increased in three cases using MN-1: Infiniband FDR, 10Gb Ethernet, and 10Gb Ethernet using the two new functions. 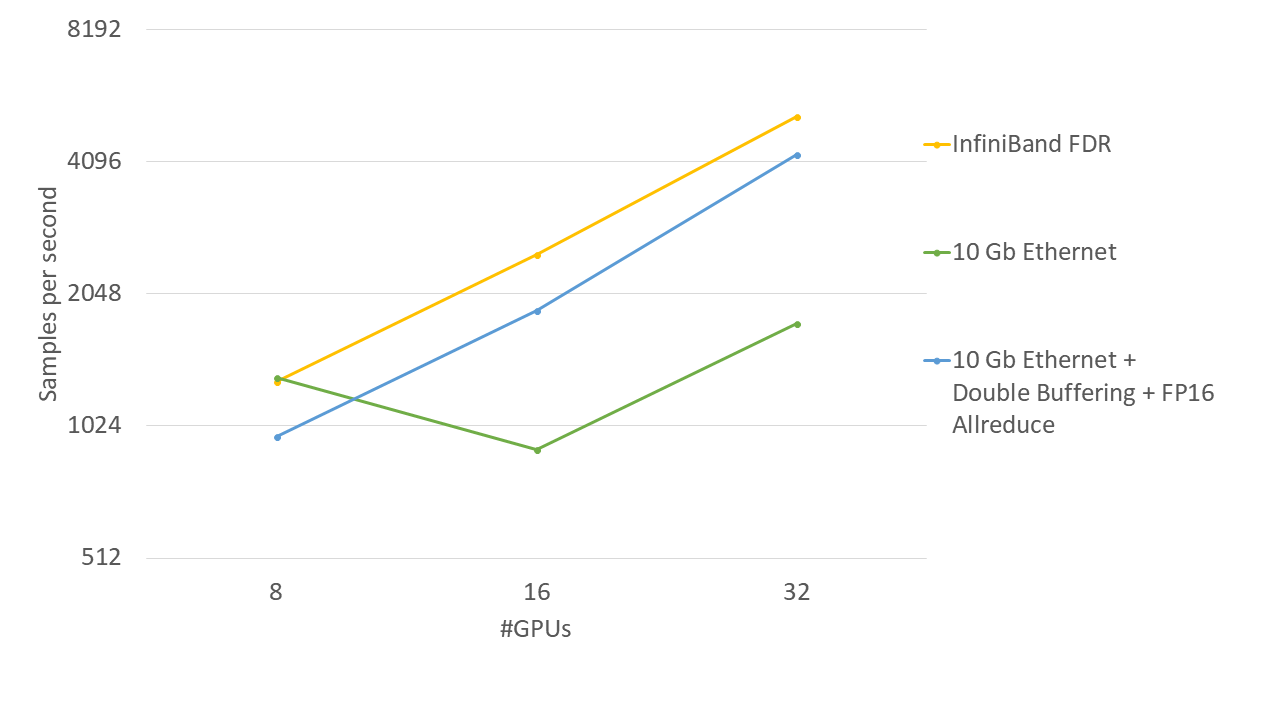 The following table also shows the average validation accuracy and average training hours when conducting training for five times with the number of epochs = 90 and 32 GPUs.

As you can see, the two new functions had almost no impact on accuracy. In the meantime, it just took 11% longer to train the model when using the 10 Gb Ethernet and the new functions than when using Infiniband FDR. With this, we can conclude that high parallel performance can be achieved while maintaining the level of accuracy, without a need to use Infiniband or other high-speed networks.

In testing with AWS, we used p3.16xlarge. This instance has eight V100, which is the highest-performance GPU available as of May 2018. The following graphs show changes in the throughput as the number of GPUs increased when using this instance. 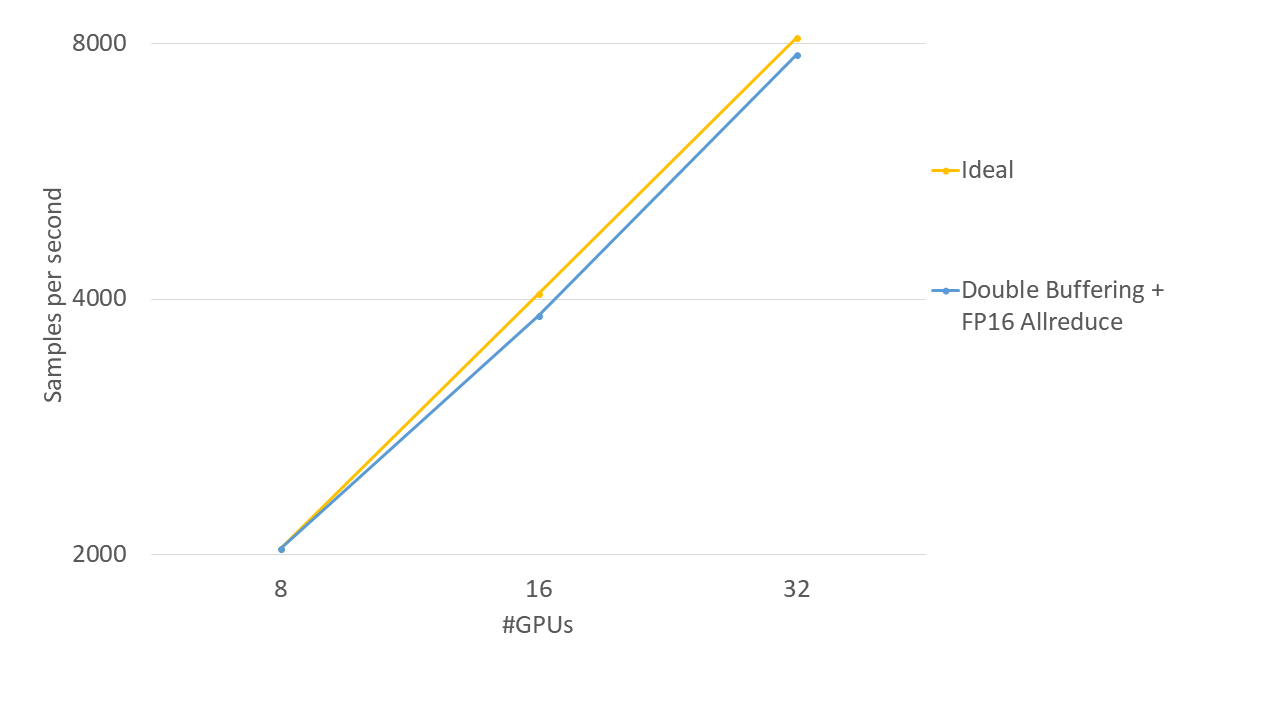 Outlook for the future

We plan to add more functions to ChainerMN, including model parallelism to support various training models that are not achievable by data parallel as well as a function to improve fault tolerance. Our team is not only developing ChainerMN but also putting efforts into making Chainer and CuPy faster, and doing large-scale research and development activities by making the full use of MN-1, which is equipped with 1,024 P100 units, and the next-generation cluster with 512 V100 units.  If you are interested in working with us on these activities, send us your application!

Setting for training with # of epochs = 90